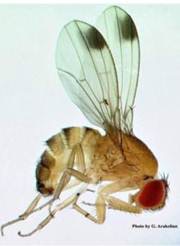 Spotted wing drosophila (SWD), Drosophila suzukii, a pest of Asian origin, was recently confirmed (8/10/12) in several counties throughout Minnesota. This new pest will pose significant challenges to small fruit producers since SWD has many generations per year, and the females lay their eggs directly into the fruit of raspberry, blackberry, blueberry, grapes and several other fruit crops. The University of Michigan has verified elderberry as a SWD target, too.

Spotted Wing Drosophila in Minnesota Updates
Use this link to read the University of Minnesota and Minnesota Department of Agriculture (MDA) Entomologists Mark Asplen and Mark Abrahamson Spotted Wing Drosophila (SWD) flies sighted in Minnesota fruit fields during the current year. SWD flies are invasive insect pests that can damage berry crops. Growers are urged to take action to manage the pests as soon as they are detected.

Richard Cowles, an entomologist of the Connecticut Agricultural Experiment Station and member of the SWD Working Group, has come up with a way for growers and others to trap SWD. He uses two-liter plastic bottles cut in half and baited with kombucha, a fermented beverage made with sugar and vinegar. Kombucha, which likely originated in China, is composed of water, sugar, white vinegar, and a SCOBY (symbiotic community of bacteria and yeast) that can be inexpensively obtained online. The ingredients are mixed carefully and held in a warm location for one to two weeks. The kombucha has aged appropriately when it is effervescent and has an aroma reminiscent of apple cider that has started fermenting.

The two-liter bottle trap that holds the kombucha is a "major advance," according to Cowles. The starting materials are inexpensive, the trap is relatively easy to make, and having the opening at the bottom of the trap is compatible with use of insecticide and sugar-baited sprays for those using an attract-and-kill program. [Read more here.]

1 tablespoon yeast with 4 tablespoons sugar in 12 oz of (initially warm) water, using Red Star active dry yeast. At least 3 traps per acre around periphery for small plots as well as some in the middle. Hang off the ground in shady areas since the flies like cool, not hot or cold.

For organic control use Entrust/2oz with NuFilm for best results. Alternate with Pyganic.
More details and specifics at the U of MN web sites.

Penn State 2015 Final Report on SWD with links to support for berry growers.

U of Pennsylvania article on managing SWD: http://extension.psu.edu/publications/ee0045

U of MASS / Amherst article on managing SWD: https://extension.umass.edu/fruitadvisor/spotted-wing-drosophila/management

Midwest Elderberry Cooperative Organic Feasibility Study, page 10, noted that “research in Oregon has noted that bagging fruit inside clear or black plastic bags contain(ing) adult flies, and placing these bags in the sun will kill SWD.”

2015-2016 comments: Terry Durham in Missouri recommends liberal use of Neem Oil for organic control of SWD. He sprays it on the leaves and the soil. Neem Oil provides other benefits to soil health as well.

NY blueberry grower Dale ila Riggs, The Berry Patch, <rberriesrgreat@fairpoint.net> uses 80 gram netting manufactured by Tek-Knit Industries in Montreal Canada.  The 60 gram has too large a mesh size to work for SWD.  A couple of companies sell it (mostly in Canada), but since I am a grower and just trying to help other growers with this nasty pest, I have very little overhead so we seem to have the lowest prices on this material. I always encourage growers to work together and put in a joint order.  As long as I receive one check, I give each grower the appropriate price per roll and then everyone can split the shipping charges. The netting has a 5 year warranty against UV degradation as long as it is either rolled up during the winter and covered with UV resistant black plastic or it is stored inside. If you take care of it, given that it only needs to be used 2-3 months a year, it will last a VERY long time.

The netting provides 5 way protection.  Not only does it prevent SWD infestation, it also protects against birds, strong winds, heavy rain, and hail.  In 2014, the first year that I used it, it went through 3 severe thunderstorms and 2 hail storms with pea size hail and we had no problems with the netting. The per roll prices are listed below.  The more rolls you buy, the cheaper it is per roll.  The rolls are 328 feet long.

Sawflies - Light colored ones like these seen on MN elderberry plants

Sawflies are a group of insects related to wasps and bees. Their name is derived from the saw-like ovipositor the adult female uses to lay eggs. Adult sawflies are inconspicuous wasp-like insects that do not sting. The larval or immature stage of sawflies are plant feeders and look like hairless caterpillars (the immature stage of butterflies and moths). The most distinguishing character between sawflies and caterpillars is the number of prolegs (fleshy, leg-like projections) on the abdomen. Caterpillars have 2-5 prolegs on the abdomen (Fig. 1), while sawflies have 6 or more. Sawflies often feed in groups and can quickly defoliate portions of their host plant. There are many different species of sawflies and each prefers specific plants or groups of related plants. Some of the more common sawflies that feed on trees and shrubs in Minnesota are described in this publication

Four-Lined Plant Bugs have been seen in Minnesota on elderberry’s new growth. 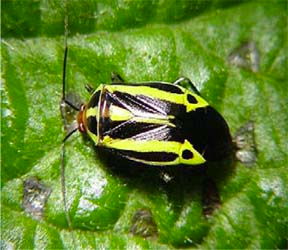 Leaf spots on your perennials, shrubs and trees may be caused by four-lined plant bugs. Four-lined plant bugs feed on a wide variety of perennials, shrubs and trees, leaving sets of leaf-spots that look a lot like a disease (Photo 3). The spots may be circular or angular, light brown to purple or black, or may be ringed. They are caused by saliva that is injected into leaves from their needle-like sucking mouthparts. Sometimes, the leaves may also be distorted where the plant bugs are feeding.

Miscellaneous Photos of Some Elderberry Problems

As a wild selected perennial, elderberry has fewer problems than many crops, but differences in cultivation practices, soil structure, microclimates and plant variety are just beginning to be studied. Just placing thousands of elderberry plants in one field creates a whole new plant environment unlike elderberry’s wild appearance as scattered clumps. With so much to learn, we encourage all growers, from home gardeners to farmers, to observe and take notes. We anticipate further university research involvement as the importance of elderberry as a crop begins to be noticed.

The photos and notes below illustrate a few elderberry issues. Some are more common, like cane borer damage, while others are singularly odd and perhaps not seen anywhere else. 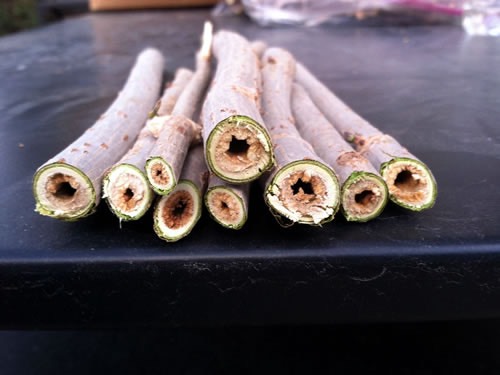 Cane borer damage noticed when taking cuttings, Natura Farms in Scandia, MN. Specific cane borer not identified. It is best to cut any dying/dead canes and look for borer worm-pencil-size holes. Borers often enter at the base of the plant. Be sure to chop up in the field or remove and burn these canes. 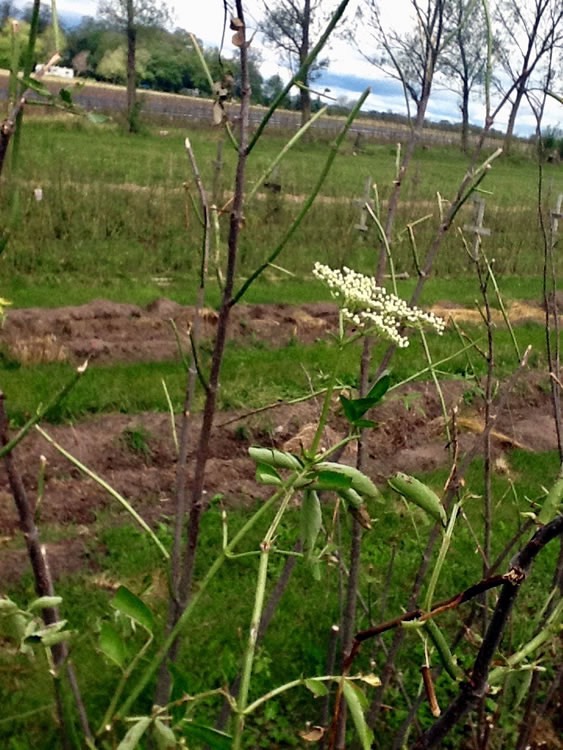 Instead, I’ll be singing, “Where have all the flowers gone…”

One of our favorite events [See pictures from 2016.] was been cancelled by an act of nature. Fortunately we are a grower cooperative with twenty members, so other growers have flowers to  be sold by MEC to local food and beverage producers as well as to dry them for distribution to local food cooperatives for bulk retail sales.

Paul Otten and I decided on June 18 to cut what you see in those sad pictures all the way to the ground. We shall see what happens in regards to this year's harvest, but we know that this is the healthiest option for our plants and soil.

We plan to post pictures from the early fall to show how the plants recovered. 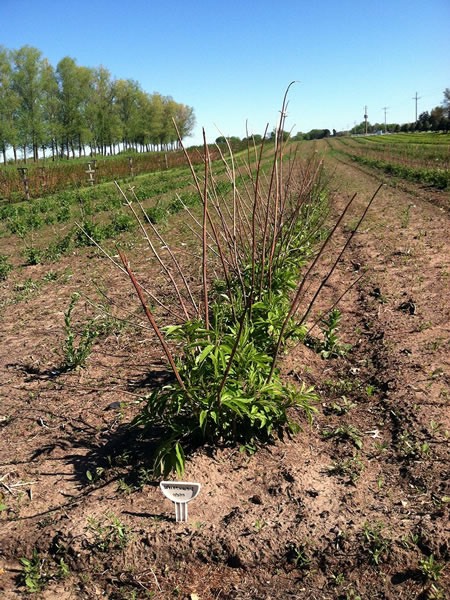 Winter freeze damage to a first year planting. We suspect this was due to a quick hard freeze before the plants had gone fully dormant. The canes were too green, so the plant sap froze, shattering them.

Note the dead canes with the new shoots from the roots.  We lost cuttings but had flowers and fruit, though with more weed and pest management issues where we did not remove the shattered canes. North Field planting, Natura Farms, Scandia, MN.

This warm fall comes with potential consequences for us with this weekend's sharp drop in temps. About three years ago (pictured here), Paul & I experienced a similar occurrence, not noted in advance but in the spring when we went out to make cuttings. In the spring you need to see the green wood in the cane for it to be viable. In our experience Johns do not like to be trimmed to near the ground while Adams, Bob Gordon and Ranch do well with it. Some of the wild selections I have do not like to be trimmed either, that is if I want flowers and berries. If the cane is internally shattered, you should trim it down to the green wood or the ground.

When the temps drop hard and the sap is still in the cane, it can shatter internally prohibiting the sap from rising all the way up the cane to produce viable cuttings and/or a healthy plant. The best thing to do is to cut it to the ground otherwise the plant and production are stunted, deformed.  In our case three years ago with a young field, we had many more weed issues around any of the shattered canes that we did not remove entirely, as we were pruning by hand at different heights to experiment as well as making cuttings. Your microenvironment will greatly impact what happens in your fields in any one event like this.

Eriophyid mites on young elderberry (below) 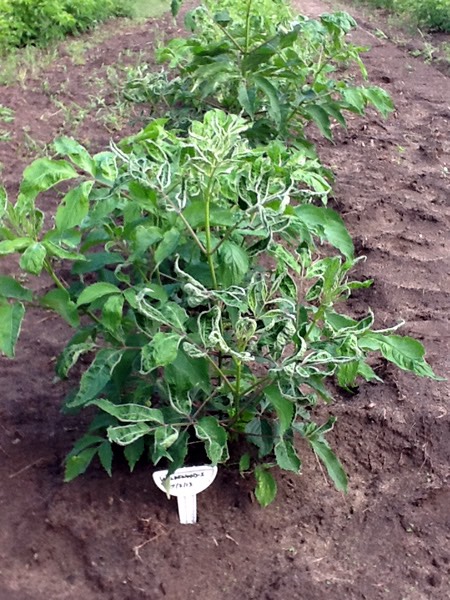 The Eriophyid leaf mites overwinter ⅔ way up the cane. They are best managed by complete pruning to ground at the end of the year when dormant. This is difficult if you plan on harvesting cuttings. You can mark infected plants and cut them to the ground, as well as general preventative control by pruning any dead or dying canes (probably from borers) completely whenever noticed. Be sure to chop up in the field or remove and burn these canes.

Below, a relatively uncommon banana shaped rust on cultivated elderberry from Mondovi, WI. 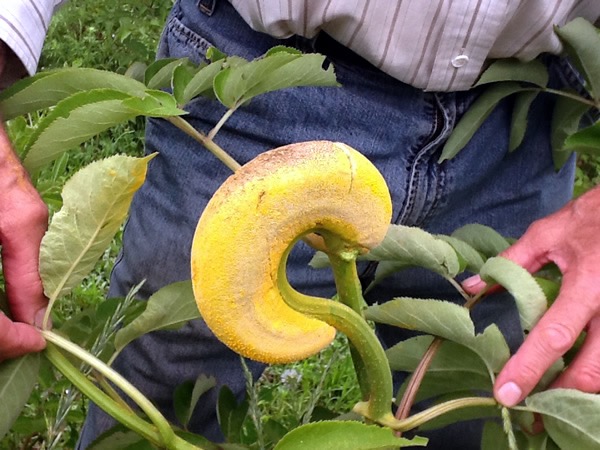 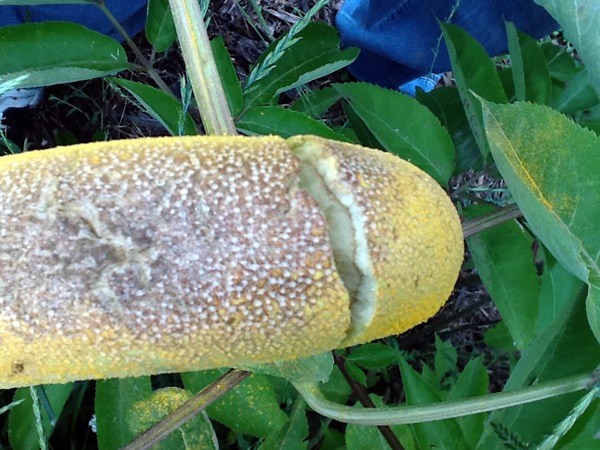 © Midwest Elderberry Cooperative 2018
[Back To Top]